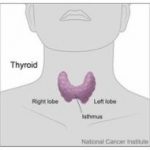 Association of RAI treatment with cancer mortality in patients with hyperthyroidism

Radioactive iodine (RAI) therapy has been available for the treatment of hyperthyroidism since the 1940s. It is well known that higher doses>400 Mci have been linked to an increased risk for cancer, while low doses typically used to treat hyperthyroidism (5-20 mCi) result in minimal, if any, increased cancer risk.

The Cooperative Thyrotoxicosis Therapy follow-up study (CTTFS) followed >35,000 patients in the US and the United Kingdom between the years 1946 – 1964 who were diagnosed with hyperthyroidism and treated with small doses of radioactive iodine therapy. In 1998, data from the study suggested that RAI therapy was not associated with an increased risk of cancer. The authors extended the analysis to include an additional 24 years of patient follow-up. Of the 18,805 patients analyzed, average age 49, 78% were female and 93.7% had Graves disease, treated with an average dose of iodine of 10.1 mCi – 17.6 mCi. The average follow up was 26 years.

There have been few studies that address cardiovascular risk for women with type 1 diabetes as they transition into menopause.

These patients were followed for 18 years.

My perspective. It will be key to further examine how gender-specific factors may affect cardiovascular risk in those with diabetes and identify treatments to help modify and minimize this risk.

This study included nearly 27,521 men, 61,680 women and 55,684 younger women who were healthy with no chronic conditions at the baseline of the study. The researchers evaluated the association between changes in nut consumption over 4-year intervals and changes in weight over 20 to 24 years. Results showed that increasing the intake of nuts, walnuts and other tree nuts by 0.5 servings/day was associated with a lower risk of obesity and lower risk of weight gain >2-5 kg.

Researchers noted that because most of the patients were Caucasian health professionals with higher socioeconomic status, the study may not be valid in other populations.

My perspective. Just a handful of nuts may help keep us from packing on the pounds as we age.

Benefits of Listening to Music

One last note – I also want to share a fascinating non-endocrine article describing how music can positively stimulate our emotions, inspiring and motivating us, adding meaning to moments and enabling us to remain connected to important memories and to one another. Please check out this article on music’s many health benefits. Click here for more information.

Wishing you the best of health,
Denise Armellini, MD